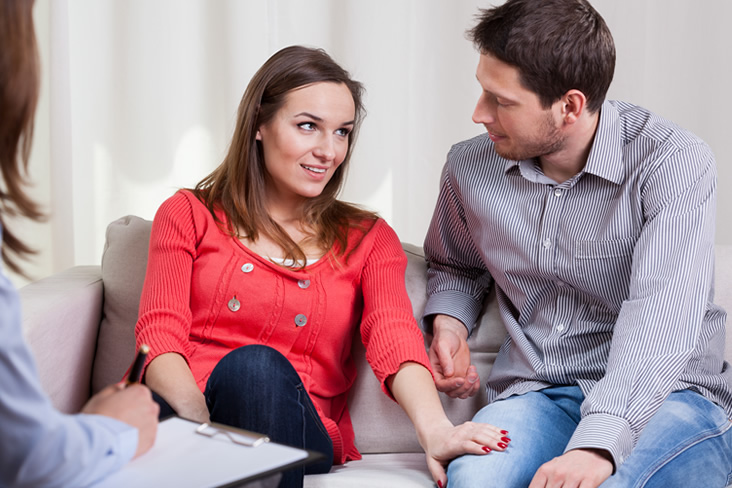 Usually in Discernment counseling a couple presents where one of them is “leaning in” and the other is “leaning out.” The former wants the marriage to work and is invested in anything that will help. The latter is ambivalent and somewhere along a continuum of being done with the marriage to considering reconciliation if some major changes were to take place. The beginning point of couples therapy is not dissimilar. It is rare for a couple to arrive for a 1st session in agreement about saving (or dissolving) their marriage. The ideal trajectory of couples therapy is that 2 people come to therapy equally motivated to “communicate better” and get their relationship back on track. Before I learned about discernment counseling I used to start my couples therapy work from this assumption. The couple wanted to work on their marriage because they said so. And I would eagerly get to work with them with this shared goal in mind.

As I learned to deconstruct my work however I realized that if one person said they wanted assistance I assumed both did.  I allowed the quieter person to hang back in the shadows of our therapy. I didn’t clearly explore their motivation for seeking my services. As I have previously mentioned in other posts, discernment counseling research has shown that approximately 30% of couples approach divorce with some amount of ambivalence. I am not aware of the percentage of couples that approach couples therapy in some similar state of ambivalence. I suspect that a similar percentage of couples approach couples therapy with ambivalence. Currently as a practicing discernment counselor and a couples therapist, I now assume in both that I am sitting in front of a leaning in/leaning out couple. I conduct the early part of my couples therapy work from this starting point. I believe to do so in any other way would be a mistake that is commonly committed by well-meaning couples therapists–I used to be one of them!

The early stage of couples therapy (and Discernment Counseling) looks like this: the leaning in person needs to be calmed and encouraged to give their partner space so their partner doesn’t feel emotionally suffocated. The leaning in person is usually ready to accept their faults and reluctant to challenge their partner to accept any of theirs. They have been “walking on thin ice” and continue to do so in my office. This person is easy to spot. This leaning in person needs to signal an understanding of their part in the problem, a desire for their partner to perhaps do the same, and a direct and clear signal about their own desire to change regardless. On the other hand, the leaning out person needs to be acknowledged as ambivalent. Exploration also needs to occur with this person about whether they are here to work on their marriage or to “check a box.” Or in some cases whether they plan to leave their spouse with me to take care of them after they leave. The leaning out person who is usually standing on “more solid ice” also has to be encouraged to take a systemic understanding of the problem. This is a technical way of saying they need to look at their part in how they both consciously and unconsciously collaborated to get to where they are now. If the leaning out person can accept their part, even somewhat, and can be moved away from finger pointing then the couple is better poised for a productive couples therapy experience. If the leaning in person remains urgent to fix things and the leaning out person remains unsure, then the couple will probably drift in half hearted couples therapy until they drop out.